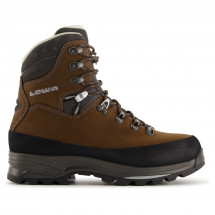 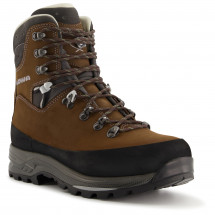 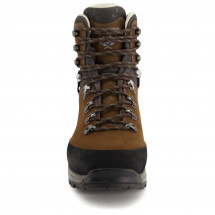 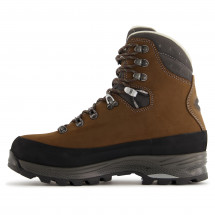 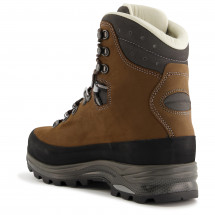 This sturdy and robust backpacking boot has proved itself many times over on the toughest treks all over the world and on countless multi-day alpine expeditions. The TIBET LL is even quite at home on via ferratas. The one-piece, 2.5 mm nubuck leather upper provides stability. The LOWA 'FlexFit? System allows an easy, natural motion of the ankle. The collar and tongue edges have extremely soft trim. Achieve optimal heel positioning with the proprietary Lace Loop technology and the patented 'I-Lock? locking hooks that work to secure your foot in place with its two-zone lacing system. The high-quality leather lining provides pleasant temperature management and great comfort. The self-cleaning Vibram® 'Masai? outsole with its large lugs shaped for uphill and downhill traction provides outstanding footing on all surfaces, guaranteed. The detailed midsole construction guarantees perfect fit and offers the utmost in comfort with its last that is somewhat wider overall in the forefoot and somewhat higher overall in the toe box. This boot, which uses the highest quality materials, is strap-on crampon compatible.

Hello, just an update on the boots. I have been pleasantly surprised with the leather lined version of these boots. My previous pair of Lowa Tibet boots were Goretex lined. I found the Goretex made the boot very tight fitting and wondered whether I should have gone for a wider fitment. There is no such problem with the leather lined version. It is very comfortable with lots of room.
My previous Lowa Tibet boots disintegrated. The rand was cut in various places and the leather was cut. Water used to come in via the cut rand and leather. This was just down to wear and tear. However the goretex lining split in various places including the seam at the heel. This is a weak point for all Lowa goretex boots I have used. Prior to the Tibets I had Lowa Sterling boots and before those I had Lowa Sarek boots. All suffered from tight fitting and split goretex lining. The leather lining has solved all of that. Also the Lowa Sterling had a major flaw. They had a good rand on the side of the boot but they also had a flex in the sole. Now a high rand (not as high as the Tibets) and a flex in the sole do not good bedfellows make. Needless to say the rand split after a short time owing to the flex in the shank. I did contact Lowa at the time pointing out this flaw in the design but no response.
The Tibets are a fine boot. The only weakness they have is on wet smooth rock. This is due to the stiff shank which does not mould to the shape of the rock and the material used in the sole. On all other surfaces they are excellent.
They are great for slopes where you can dig in the side of the sole and get a grip. Coming down the heel gives great breaking power. They are excellent in mud, loose scree and snow. With decent socks I do not find them cold in snow.
There are some slight cuts already on the toes of my latest Tibets but it is only surface damage. Sharp rocks and scree will leave their mark on any boot. I carry a full over night 65 litre pack as a matter of course, even for day walks and the Tibets give great support.
The leather lined version is very easily maintained. I hose them down after every walk and scrub the dirt off with a brush. Being leather lined I can use ordinary shoe polish to treat them when dry. All in all I am very pleased with these boots.

Yes, I would recommend this product to a friend
This is what customers from around the world say:

66% have found the reviews
by Miriam helpful

There are 10 more threads!