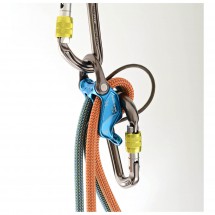 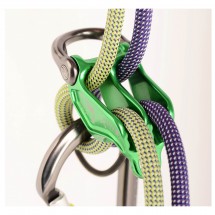 Like many standard belay devices, the DMM Pivot is made from tough and lightweight aluminum, with two friction options to help you fine tune your lowering. Unlike other devices, the Pivot sports a pivoting hinge that provides some extra leverage and smooth action when you need to lower your second off the belay ledge, making for easy, consistent, and reliable lowering whether you're taking a friend out for a climb or leading clients up their first multi-pitch.

I've been using this for several years now and it works really well both as a standard belay device and as an autolocking device. The pivot aspect of it does work to make it possible to lower people off if needed, but be careful to make sure you're using it with double ropes as it gets pretty twisted if lowering off on a single rope.
The only reason why I gave it 4 instead of 5 is that the carabiner hole on the front of it doesn't actually fit many types of carabiner.

83% have found the reviews
by Klingler helpful

100% have found the reviews
by Erik helpful

40% have found the reviews
by Gerald helpful

There are 33 more threads!