The symbol for surfing and skateboarding: the Volcom Stone 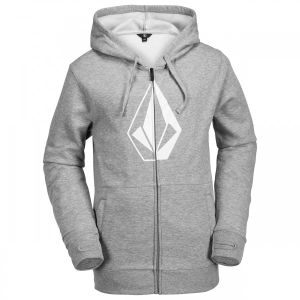 Born on a snowboard trip in Tahoe, North America, the Volcom brand has spread across the world since it was founded in the early 1990s. They're known for their motto and guiding principle "Youth Against Establishment" as well as the famous Volcom Stone. The two company founders Richard Woolcott and Tucker Hall used to spend most of their time snowboarding, skating and surfing and much less time designing and selling their Volcom clothing.

However, they were able to transport Volcom’s style and spirit all over the world. This particular style was reflected early on in everything that Volcom brought to life. From clothing, skateboarding and surfing videos to marketing campaigns, Volcom developed its own style, which has become one of the most popular on the board scene and is repeatedly copied by their competitors.

Volcom and their athletes, artists and musicians

Volcom has a different set of values than the rest of the industry. While other surf brands and skateboarding companies are always on the lookout for the best competitive riders or beautiful advertising medium, Volcom supports people with character, rough edges, a strong personality and above all, with style. Members of the legendary Volcom Family come from all over the world and are one of a kind in their disciplines and as people. For example, Kelly Slater, Coco Ho, Ryan Sheckler, Jamie Lynn or Terje Haakonsen have been working with Volcom for years.

Many artists, photographers, filmmakers and musicians compliment the professional surfers, skateboarders and snowboarders in the Volcom Family, and add their own distinct touch to expand and define the Volcom brand. From the beginning, Volcom Entertainment has been a record company, event manager and a film producer that works around the globe. Volcom and its brand logo, the Volcom Stone, has long become a legend themselves. The diamond has become ingrained with street art and pop culture and represents the "Youth Against Establishment" movement.

There are Volcom offices spread across the globe. You’ll mainly find them in places where you can catch a few waves right outside the office door. From Hossegor on the French Atlantic Coast to Costa Rica, Bali or Vancouver, Volcom is always right at the centre of the scene and also offers its employees unique possibilities to combine work with sports. All it takes to host their legendary events and surf contests is to walk outside the door.

Volcom is definitely more than just about party and beach life. The products made by this innovative US skateboarding and snowboarding company stand out for their incredible quality, their distinctive and pioneering style as well as their many subtle details. They’re not just some brand that makes designer clothing, bags and accessories, but there is actually a huge amount of surfing, skating and snowboarding knowledge put into them. In addition, Volcom places lots of value on environmental protection and social responsibility as part of their "New Future" philosophy.