When thinking of Norway, many of us outdoor enthusiasts think about its diverse natural environment and unpredictable changes in weather. Of course, the locals and developers at Norrøna, based near Oslo, know these conditions all too well. The company was founded in 1929, and back then, it manufactured backpacks, tents and sleeping bags. Over the years, they began specialising in the production of high-quality clothing for mountain sports. » Read more 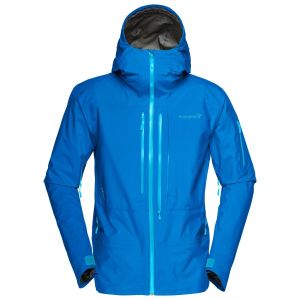 In 1979, Norrøna made a real technical breakthrough by producing the first Gore-Tex jacket in Europe. This was an incredible milestone, and since then, many of their models, such as the Svalbard, Falketind, Lyngen, Lofoten, Narvik have become fan-favourites. Norrøna’s top priority has always been to produce perfectly functional clothing with a minimalistic design and cool colour combinations to put a smile on their customers’ faces.

Their modern designs often make you forget that Norrøna is a brand with a long history. Their history stretches all the way back to 1929, where they began with only producing backpacks, tents and sleeping bags. Today, they still produce outdoor equipment, but the brand is better known for its high-quality clothing made for mountain sports.
The Norwegian outdoor experts have produced outdoor jackets made of Gore-Tex as early as 1977, and were the first manufacturer in Europe to use the functional membrane. Many of their products went on to become classics: the Svalbard, Falketind, Lyngen, Lofoten and the Narvik.

Less is more, goes the motto, but this is better known as Loaded Minimalism in the company. This means that all the important features for clothing made for outdoor adventures are included, but without any added features that can compromise the product's functionality. As a result, their products have a minimalistic, functional design with great colours. 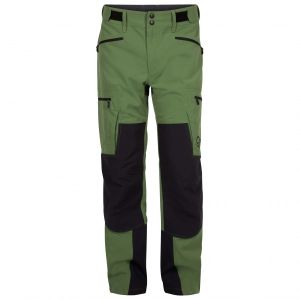 When slipping into one of Norrøna’s hardshell jackets or mountaineering trousers, you’ll enjoy a perfect fit and there’ll be nothing to unnecessarily weigh you down. The company does a great job at designing their products because they’ve been producing equipment built for challenging endeavours in the most remote corners of the world, such as the North and South Poles, the Himalayas and other remote peaks. In such areas, having apparel with reliable, durable materials is an absolute necessity. The owner of the company once said “a new product is great, but a ten-year-old product is even better,” which is a clear reflection of the company’s demands on their own products.

You may be surprised by the fact that there isn’t a large corporation hiding behind the brand. The company, which was founded near Oslo is still owned and managed today by the founding family. The company doesn’t advertise the fact that it designs most of its collections itself and that the samples are designed in the prototype workshops at its headquarters. The samples are tested under tough to extreme conditions and only then are they allowed to go into production.
In addition, corporate responsibility is an important topic to the company, and it’s taken very seriously. This applies to many aspects of their company, from choosing their suppliers to avoiding air transport as much as possible. Plus, Norrøna develops relationships with its suppliers and strives for long-term partnerships. Most importantly, their factory tests and checks ensure fair working conditions in other parts of the world. And, to create some of their fabrics, they use the raw materials of recycled products whenever possible.