The Ohm from Edelrid – A difference maker

Good news for heavier climbers and lighter belayers: Thanks to Edelrid’s spectacular new device – the OHM – you can go climbing together! But before you do, we thought we’d put the OHM to the test and let you know what it can and can’t do, who it’s suitable for and most importantly what we think! 🙂 In order to understand what the OHM does, we’ll have to take a little detour into the world of theory, climbing theory that is. More specifically, we’re going to talk about weight and the difference in weight between you and your climbing partner. If the weight difference between you and your partner is too high, not only will lighter belayers have a hard time controlling a fall, but both climbers could be put in extremely dangerous situations.

If you’ve ever read up on the role of weight in climbing or experienced it yourself, you’ll know how quickly forces can develop in the event of a fall. To find out just how high these are, you can use our calculator for impact force.

The significance of weight led the DAV (German Alpine Club) to release a recommendation for weight differences, specifying which are justifiable and which are not. A study on safety in climbing centres from 2012 has demonstrated that climbers were too heavy for their belayers in 8.5% of the examined cases.

You can calculate the weight differential rather easily:
Weight of climber / weight of belayer = Differential X

Here is an example: There is a weight differential of 1.36 between a climber who weighs 75kg and a belayer who weighs 55kg. This would far exceed the standard put forward by the DAV (German Alpine Club).

How the Edelrid Ohm works

The Ohm basically replaces the first draw and is clipped into the first bolt instead. In the event of a fall, the Ohm is pulled upward. This leads to the device changing its orientation relative to the rope, resulting in increased friction. The increased friction generates resistance, which progressively slows (but doesn’t abruptly stop) the rope. This results in less force being transferred to the belayer.

The benefits of the Ohm

As was mentioned above, the increased amount of friction reduces the amount of force transferred to the belayer in the event of a fall. This will prevent the belayer being pulled forward so violently toward the wall or the first draw. If you’re using a tube-style device, you’ll need less grip strength to hold a fall.

Climbers who tend to climb with significantly lighter partners often have to climb extra carefully in order to prevent uncontrolled falls. This is rendered completely unnecessary by the power of the Ohm! Since the weight difference is “evened out” or “reduced” by the device, lighter belayers are capable of securing uncontrolled falls as well. That way, the climber won’t have to hold back!

What the Ohm can’t do

Very important: the Ohm is not a belay device and it changes nothing about the DAV’s current standard. If you use the Ohm, you also continue to use 1. your belay device of choice and 2. your head.

This is particularly important when it comes to age differences between climbers. The Ohm reduces significant differences in weight but doesn’t add experience. If you use this device, you still have to belay as always (training) and assume the responsibility for the climber (age). It’s not there for parents to use to go climbing with their underage kids!

The Ohm put to the test

We tested the Ohm in different conditions: Lead climbing indoors and outdoors, top-roping and in a climbing course for kids (supervised belaying).

More comfort and safety for the belayer 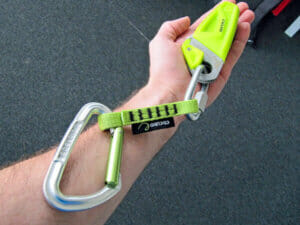 Yep, the Ohm makes belaying heavier people not only significantly safer but more comfortable as well. During various scenarios (with various fall heights and weight differences), the Ohm has proven to reduce the amount of force on the belayer. Plus, the rope runs more evenly as well, making belaying much more pleasant. Using a sand bag for extra weight was no longer necessary. Lowering is much easier with the Ohm as well. It actually feels more like a rope running diagonally with increased friction.

More freedom for the climber

The climbers who tested the Ohm all agree that the Ohm adds safety and definitely takes some unnecessary stress off climbers as a result, since they can dedicate all their attention to climbing and not have to worry about falling (as much). This allows climbers to push their limits and take on more difficult routes closer to the ground.

The Ohm and top-roping

Since not all climbing parties top rope, we decided to test the Ohm whilst top roping as well. As expected, the assisted-braking resistor performed flawlessly. The only downside: Because it is installed in the first draw, the belayer cannot change positions as freely as he or she normally could whilst top-rope belaying. This leads to the climber having a rope between him or her and the wall.

The Ohm at the crag

…works just as well as at the climbing centre. Since ropes often don’t run as straight along a rock face as they do indoors, you need to keep in mind that there could be more rope drag as a result. So, the Ohm might not be necessary for all routes.

Flawless! Yes, the weight does seem a little much in the beginning, but since you only have to carry to the first draw, it’s not that big of an issue. Besides, the weight is necessary so that the Ohm doesn’t fall when the rope is slackened and you lose resistance as a result.

Even when taking slack out the rope, you’ll hardly notice the Ohm. But, after taking a break on the wall, you should make sure that the rope is completely disengaged and the Ohm is underneath the draw. Otherwise, it could get rough. Users of the Grigri2 will be familiar with this. Also, don’t forget to unclip the Ohm. Otherwise it’ll stay hanging on the first draw. And, take the brake rope out first.

is possible, but this also depends on the weight of the climber, as far we’re concerned. The lighter the climber (less than 80kg), the more the belayer has to actively belay in order to make a somewhat dynamic fall possible. If you fancy soft belays, you may have to lower your expectations or use a tube-style device.

The Ohm and kids

Kids of the same age can vary in weight, so we thought it would be a good idea to try to use the Ohm in a climbing course for top-roping (supervised, with a back-up belayer). With kids, you’ll find that the weight differential goes up to as much as 1.3. Unfortunately, the Ohm couldn’t help here. Since children rarely weigh more than 65kg, dynamic falls are hardly possible. So, due to the conditions described above, using the Ohm is basically out of the question.

In sum, the Ohm is an incredibly innovative idea that tackles a common issue in climbing. It’s surprising that it took so long for somebody to come up with a device with the aim of solving the problem associated with the weight differences between climbers and belayers. After all, there are so many climbing parties that can either climb in completely empty climbing centres only or climbing exclusively indoors. Who would want to take a sand bag to the crag anyway? Don’t even get me started on alpine climbing.

Does the Ohm make sense?

In our opinion: Yes! Of course, you’re going to have to make some sacrifices (dynamic belaying, weight, top-roping), but when you consider the fact that you’ll be able to climb with people you could’ve never dreamed of climbing with before, the number of downsides pale in comparison to the huge benefits the Ohm provides: convenience and safety. All in all, a spectacular innovation that should’ve been here a long time ago!

When is the Ohm being released?

Well, it’s already out! Head over to our shop and check it out! If you just can’t get enough of Edelrid, check out the new collection!

The Edelrid Ohm in our shop>> 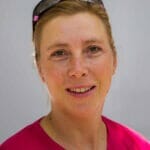