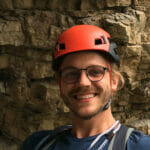 When people first start climbing, they tend to concentrate primarily on the handholds. They pull themselves up first and then their feet follow. Why? Because our fingers play a very big role in the motor and sensory areas of our brains. As a result, they give us a feeling of security, and people tend to pull themselves up rather than climbing more technically. This might work at the lower grades, but more difficult climbs will require more than just brute force.

A basic principle of climbing/bouldering is to use your own strength on top of the climbing techniques to get yourself up the wall efficiently. It takes experience to feel secure in different positions and footwork. The following series of articles will show you different skills and techniques that will help you to climb more efficiently.

The first article details the basic principles, which will reduce your physical effort as well as the risk of injury while climbing. Whether or not you can use a particular technique depends entirely on the route and situation; not all techniques can be employed on all routes. But after a few hours of practice, everyone will find their own unique style of climbing and start to understand how the techniques should be used.

The following skills will be helpful:

A general mistake is pulling yourself up with your arms rather than using your leg muscles, which are much stronger. Your hands should just help keep you from falling off the wall; the upwards motion should come from your legs and hips. In order for this technique to work properly, it’s important to twist your hips toward the wall and have three points of contact at all times.

Twisting refers to moving from the hips – you twist your hips so that the hip on the side of the arm that is reaching further is closest to the wall. This makes it easier to use your legs and torso to propel yourself while climbing. And this is all easier to do when you have three points of contact with the wall. It can also help to press your foot against the wall in such a way that it can rotate more easily.

PS: A lot of people have the habit of looking at upcoming handholds only, even though it’s also incredibly important to look down at the footholds so that you know where they are as well.

Paying attention to the direction of the pull

To put pressure on the holds in the direction you want to pull, position yourself to the left of the holds. That’s because gripping a hold enough doesn’t always mean using all your strength but rather positioning your body ideally in the direction of the pull and shifting your weight to the footholds.

By twisting your hips to the left using the muscles in your torso and right leg, you shift your weight to your left foot. This takes the stress off your left hand, allowing you to reach up with your arm extended. As soon as the handhold is within reach, you should look down toward your leg in order to position your feet properly for the new position and next move.

The arrows in the pictures show the direction and intensity of the force that the climber is applying to the wall.

Distributing the load on both hands

You should try to move to the next handhold as late as possible. The longer both hands are gripping a handhold, the longer the load is shared between the two hands.

In the next images, you can see that the climber’s right hand stays on the handhold until the position of his body allows him to grip the next hold at the best possible angle. The movement comes exclusively from the legs and the hips; the hands are only used to keep the climber from falling off the wall.

You can also see in these images that properly positioning the hips takes the load off the right hand. The climber in the picture shifts his centre of gravity under the left hold and onto the left foot, taking the load off his right hand and allowing him to reach up with it.

Your centre of gravity should be directly above a foothold or somewhere around the middle between two footholds, so perpendicular. This transfers the load primarily to the legs. In this position, you should always make sure that you have good body position before reaching for the next hold.

Another important factor is gripping holds gently to save your strength. People often tend to squeeze the grip more firmly than is actually necessary, which is why you should make a conscious effort to grip with as little physical effort as possible. Paying attention to the direction of the pull and focussing on your centre of gravity on the wall allow you to grip the handhold with less force. Your body must be positioned so that your legs bear the majority of the weight. If you make an effort to grip more gently, you’ll save strength for the more difficult moves, which can sometimes require brute force.

If you don’t have experience with a particular type of handhold, you might not know the best way to grip it. But the “grippiness” of a hold depends primarily on the optimal gripping technique. You can only take full advantage of your hand strength if you use as many fingers and finger joints as possible. The fingers should be placed as closely together as possible.

In the next article in this series, I will describe the most common types of holds and what you can look out for.

Especially when climbing easier routes, try to get your grip perfect on the first try and avoid re-adjusting. This saves you time, energy and allows you to concentrate on your upcoming moves. Ideally, you should plan your route up the wall in advance. This takes a bit of practice and will be rather frustrating at the beginning, but the mistakes you make in the beginning will help you improve quickly.

Sport has always been the centre of my life, and after a few detours, I discovered the world of climbing and also stumbled into writing. By studying sports science and spending my free time on rock faces around Karlsruhe or in the Alps, I was able to turn my hobby into a profession and now write about my passions on the base camp blog.
More ofFelix 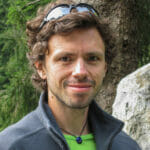