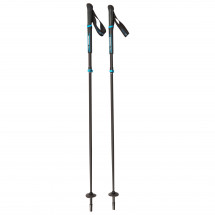 (1)
You are familiar with this product? 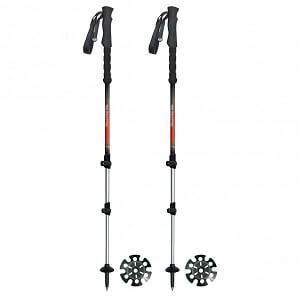 Equipped with large snow baskets, mountaineering poles ensure that your arms and upper body are supported during your ascent for optimal efficiency. Plus, you can use them like normal ski poles during your descent.

Just like trekking poles, the individual segments of telescopic poles can be pushed into each other. They either feature a clamp or twist lock that allows you to adjust their length. Plus, when collapsed, you can attach them to your ski touring backpack and transport them with ease.

Folding poles typically have a smaller adjustment range. However, thanks to their stability and light weight, many ski tourers are happy to use them. Their tiny pack size is great for transporting them in or on your backpack.

Mountaineering poles made of aluminium and carbon

Aluminium and carbon are the most common materials used to make trekking and ski touring poles. Of course, there are certain differences in the production and selection of raw materials, but both materials are pleasantly lightweight and stable. Manufacturers, such as Black Diamond, Komperdell or Helinox, produce a wide range of ski touring poles using both materials.

Generally, aluminium is slightly more stable and durable than carbon. But when it comes to weight, you're better off with an ultra-light carbon pole. The differences in weight and stability are often so minor among high-end poles that they’re only relevant for competitions or if you’re a fan of ultra-light equipment. A successful ski tour rather requires well-formed cork grips or plastic grips that you can grab safely with your ski touring gloves. Baskets with a large diameter are just as important for use in deep snow because small baskets tend to sink too far in.