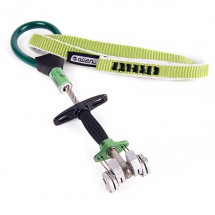 (1)
You are familiar with this product?

Only used for a few weeks so far, but no complaints. Some comments: I prefer the totem cams for the lobe finishing (diagonal lines). I like the extending slings on these, helpful on long pitches if you're running low on draws or if you want to carry fewer (though realistically you'll need a lot of cams on your rack with extending slings to start carrying fewer draws). They still hang/rack identically to the original and totem versions. Note the red is marginally bigger than totem basic red (which is smaller than in other brands to remove the need for a grey, 7/8"), so these are arguably slightly better if your next size up is BD green (0.75). The yellow here is identical in size to a totem (and original alien) yellow as far as i can tell. I haven't had them long enough to give any comment on longevity compared with other alien type cams (aliens almost wear faster than most other small cams due the softer alloy in the lobes, (but they hold your falls more consistently)). The "action" - the most unimportant and overrated aspect of any camming device? - is not particularly smooth with these compared with other cams in general and certainly less so than in the totem aliens. The totem seems to the have a plastic insert to make the trigger sheath smoothly slide over the stem. The reduced smoothness did not affect my climbing experience with these in any way. The trigger seems changed and seems robust, time will tell, it may be wider if i recall correctly, than on the original alien and the totem. There is little benefit that I can tell from making the axle ends flush with cam lobes (which these fixe aliens do). Hopefully this doesn't come at any cost in terms of lobe longevity (wobble) and manufacturing consistency (the achilles heel of the alien design). The trigger wires seem okay, but personally I find the cable design in the totem basic cams to be preferrable (doesn't bend into shapes). In summary, these cam seem to work fine and are in my opinion the aliens-of-choice until totem release their basic cam with an extending sling.

Yes, I would recommend this product to a friend
£ 5 now
For your next order
No thank you.
<![endif]-->